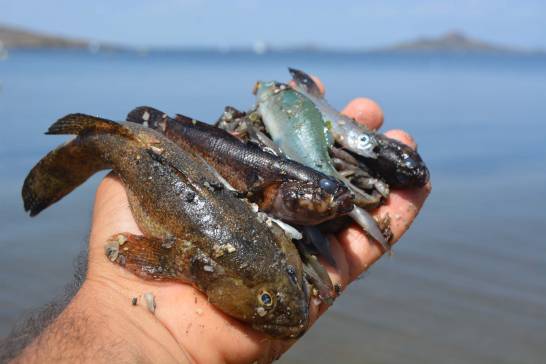 The Ministry for the Ecological Transition and the Demographic Challenge commissioned the Spanish Institute of Oceanography (IEO, CSIC) to carry out a study on the Mar Menor that updates the exhaustive previous report carried out by this institution in July 2020. The work corroborates the determining role of the contribution of nutrients and organic matter as a motor of eutrophication of the lagoon. “The excess of phytoplankton caused by this dynamic has limited the entry of light and affected both photosynthesis and the availability of dissolved oxygen until levels close to hypoxia”, They point from the IEO.

The authors note that this summer’s extreme event – one more since the 2016 ‘green soup’ – shows that the lagoon ecosystem has lost its capacity for self-regulation. However, “their recovery is feasible as long as the problem of discharges is tackled and essential characteristics such as salinity are preserved, which would be affected by the opening of gullies or communication channels with the Mediterranean”, they assure.

Their recovery is feasible as long as the problem of spills is tackled and essential characteristics such as salinity are preserved, which would be affected by the opening of gullies or communication channels with the Mediterranean.

The work is signed by six authors of the institute and is based on the data obtained in the lagoon monitoring program maintained by the institute and on the results of various research projects. The analysis provides evidence that this mortality event is closely linked to the eutrophication process responsible for the degradation of the salty lagoon.

“The phytoplankton proliferation recorded in the lagoon took place at the beginning of summer in the vicinity of the Rambla del Albujón –the study indicates–, an important entry point for waters highly polluted by fertilizers and other compounds ”.

The bloom The outcrop continued to grow during the months of July and August, and spread through the central and southern areas of the lagoon, where the renewal of the water is less, causing extreme turbidity and severe reduction of the light available for photosynthesis “to totally levels critical to survival of bottom vegetation”, They underline. If the situation persists, the benthic vegetation could die and aggravate the environmental crisis. The scientists give as an example the southern area of ​​the lagoon, where the seaweed meadow Caulerpa prolifera it has almost completely disappeared for lack of light.

In the same way, the excess of phytoplankton has introduced into the system large amounts of organic matter whose decomposition explains the depletion of dissolved oxygen in the water throughout the month of August to levels close to hypoxia. The values ​​achieved, although not as low as in the 2019 episode of anoxia, are lower than those historically recorded in the Mar Menor and what is considered stressful or even lethal for many marine species.

The excess of phytoplankton has introduced large amounts of organic matter into the system, the decomposition of which explains the decrease in dissolved oxygen in the water throughout the month of August to levels close to hypoxia.

Although the observations made at the beginning of September suggest an improvement in the oxygenation of the lagoon, “it may be something transitory due to the change in the local wind regime”, the authors point out. Organic matter saturation and turbidity persist, even extended to the north, so the risk of new hypoxia and anoxia also subsists.

Among its conclusions, the IEO study found no evidence that the summer temperature has been the triggering factor of this new episode of mortality of marine organisms. In fact, so far in 2021 the temperature of the lagoon has been lower than the average of previous years.

The report recalls the deep deterioration that the Mar Menor ecosystem has experienced since 2016, and the serious environmental pressures it suffers, derived not only from the discharges from intensive agriculture in the Campo de Cartagena area, but also from the arrival of pollutants chemicals and mining, works and urban developments in this area of ​​the Murcian coast.

However, the researchers consider that the recovery, although complex, it would be feasible if the nutrient input to the lagoon was cut off through discharges, as has been verified in other coastal ecosystems subjected to similar aggressions in different parts of the world.

They consider it crucial not to continue altering the key environmental conditions that determine the resilience of the lagoon ecosystem and its basic ecosystem properties, such as salinity.

Likewise, they consider it crucial not to continue altering the key environmental conditions that determine the resilience of the lagoon ecosystem and its basic ecosystem properties, such as salinity, on which its biological functioning and the uniqueness of its biodiversity depend to a great extent.

In this sense, they recall that the average salinity of the lagoon has been increasing since the summer of 2020 and, if it continues like this, it could recover its normal values ​​in summer of 2022. “As long as torrential rains or other extreme weather events do not occur, nor human interventions such as opening channels of communication with the Mediterranean or golas ”, they emphasize.

The latest events in the Mar Menor and the confusion about their causes also reflect the deficiencies in current lagoon monitoring systems. These must be improved and updated to detect this type of event and its origin in an unequivocal, reliable and transparent way, they conclude.

‘New event of massive mortality of marine organisms in the Mar Menor: context and factors’