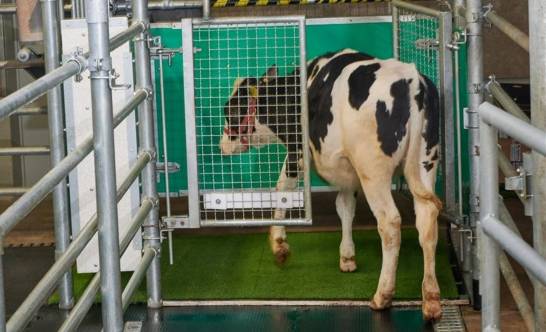 Although the ammonia of cow waste does not contribute directly to climate change, when it seeps into the ground it becomes nitrous oxide, the third most polluting greenhouse gas. To avoid this indirect damage, cows have been taught to use the toilet on a farm in Germany.

The goal is simple: prevent cow feces and urine from accumulating and spreading on the ground, which together generate this gas. When it seeps, it pollutes the soil and local waterways. Agriculture is the largest source of ammonia emissions, with livestock accounting for more than half of that contribution.

Agriculture is the largest source of ammonia emissions, with livestock accounting for more than half of that contribution

The idea comes from an international team of researchers from the Farm Animal Biology Research Institute (FBN) in Germany and the Auckland University (New Zealand), the results of which have been published in the journal Current Biology.

The study has shown that cows can be toilet trained, which allows to collect and treat waste, keep the barn clean, reduce pollution from the air and create more open and animal-friendly farms.

“It is normally assumed that cattle are not able to control defecation or urination, but like many other farm animals, it is quite intelligent and can learn a lot. Why can’t they learn to use the toilet? ” Jan Langbein, FBN ethologist and lead author of the study.

To teach calves to relieve themselves, the researchers devised the training “MooLoo”Which consists of rewarding calves when they urinate in the latrine and getting them to associate doing so outside the latrine with an unpleasant experience.

The cows showed a level of learning comparable to that of children, and higher than that of very young children

“As a deterrent, we first used headphones in the ear and made a very unpleasant sound every time they urinated outside. We thought this would bother the animals, but it was not effective. In the end, throw a splash of water it worked well as a deterrent, ”explains Langbein.

Within a few weeks, the researchers had trained 11 of the 16 calves from the farm which, surprisingly, showed a Level of learning comparable to that of children, and superior to that of very young children.

Now that scientists know how to train cows to relieve themselves, they want to transfer their results to real farms and ranches with the hope that “in a few years all cows will know how to go to the toilet,” concludes Langbein.