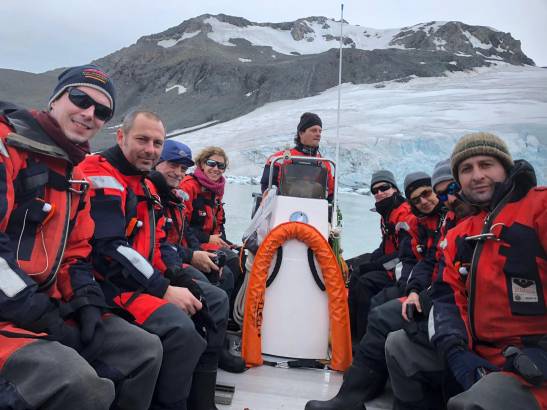 A study led by the Antarctic Research Center from Victoria University (New Zealand), and in which, among others, the researchers Carlota Escutia and Francisco José Jiménez Espejo, from the Andalusian Institute of Earth Sciences (CSIC-UGR), has analyzed the changes that have occurred in the sea ice of Antarctica during the last 11,400 years.

The work, which publishes Nature Geosciences provides highly useful information to predict the future impact of these variations on plankton flourishing.

The scientists based their research on one of the wells recovered during Expedition 318 of the Integrated Ocean Drilling Program (IODP) in Adelia Land. During the Expedition, 170 meters of fully laminated marine sediment was drilled in said well.

The eastern Antarctic margin in the Adelie Land area is today characterized by a high primary productivity supporting rich marine life. This productivity is a consequence of the contribution of nutrients from the front of the pack ice – floating ice that covers the polar regions – from the polynias from Dúmont d´Urville and Mertz and also by the Antarctic coastal current.

Polynyas are open spaces of water surrounded by sea ice that play a very important role in ecosystems and in global ocean circulation, as they are places of deep water formation, which spread across the ocean floor of almost the entire planet.

The relatively sweet ice waters, a consequence of the melting ice seasonal marine, foster large blooms of phytoplankton, – rapid increases and proliferation of algae, diatoms and other microscopic organisms on the sea surface – which give rise to a stratification of the sea water column during the austral spring.

In turn, the rupture of the sea ice in this margin is associated with changes in the katabatic winds and the intensity of the zonal wind. The organic matter and the remains of these phytoplankton blooms are rapidly deposited on the seabed, where they are conserved in the sediment as sheets that are easily identifiable by their coloration.

The sedimentary record recovered by the researchers has made it possible to determine that, between 11,400 and 4,500 years ago, phytoplankton blooms had a high frequency, between annual and biannual. From that date on, they were less frequent, occurring every two and seven years.

This change in the frequency of blooms has been related to the variation in the pulses of fresh and nutrient-rich waters from the melting of the Antarctic ice sheet after the last ice age.

Between 11,400 and 4,500 years ago, phytoplankton blooms had a high frequency, between annual and biennial. From that date on, they were less frequent, occurring every two and seven years.

About 8,000 years ago, the last glacial retreat stage had concluded and under the influence of a warmer climate, the ice pack had less duration. The meltwater from the ice floe caused a seasonal stratification of the water masses that promoted the formation of blooms. After 4,500 years, temperatures dropped, and as the seasonal duration of the ice increased, there was a reduction in the frequency of ice breakage, which meant that episodes of marine stratification were less frequent and happened every two and seven years.

The current frequency in marine productivity blooms is similar to that controlled by the climatic pattern called El Niño-Southern Oscillation (ENSO). The authors propose in this article that there is a connection between said climatic pattern and productivity in the study area, thanks to the variations in the intensity of the winds over the sea ice.

The record also notes that the influence of ENSO is affected by Antarctic modes of atmospheric variability, for example, the South Ring Mode (SAM).

This discovery is of the utmost interest since tropical climate dynamics, such as the El Niño-Southern Oscillation pattern, are associated with Antarctic processes.

This discovery is of the greatest interest since they are associated tropical climate dynamics (ENSO) with Antarctic processes. This is something that current climate models have failed to reproduce satisfactorily due to the complexity and feedback between the ocean and the atmosphere in Antarctica.

Future models will need to integrate this influence of tropical variability in Antarctic coastal systems if the impact of these critical processes on primary productivity and the carbon cycle is to be predicted.

The study also points out that an increase in temperatures in the studied margin will cause bloom events to be much more frequent and it could even lead to a loss of the ice pack at levels not seen in the previous 8,000 years.