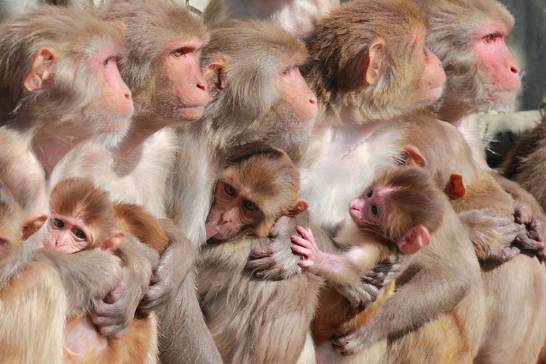 Camp Fire in Paradise, California, started in November 2018 and burned a total area of ​​620.5 km2, becoming the Forest fire deadliest – with more than 85 deaths – and destructive in the history of that state. It was also the natural disaster most expensive in the world in 2018 in terms of insured losses.

The catastrophe coincided with the peak of the breeding season for the Rhesus macaque colony of the National Primate Research Center.

The smoke extended to 100 miles when it began on November 8 and reached the National Primate Research Center located in the University of California in Davis. At that time, air quality exceeded national limits and reached unhealthy levels.

The catastrophe coincided with the peak of the breeding season from the colony of rhesus monkeys (Macaca mulatta) of the institution. Hundreds of the center’s animals regularly live in outdoor pens in large family groups. Reproduction usually occurs in autumn, and the young are born in spring after an average gestation of 166 days.

In a new study, published in the journal Reproductive Toxicity, a research group from the American university, which observed and studied the animals during and after the disaster, now shows that Rhesus macaques naturally exposed to smoke from wildfires early in pregnancy had a higher rate of abortions.

For the project, Bryn Willson, resident of obstetrics and gynecology at UC Davis Health, in collaboration with Professor Kent Pinkerton, from the UC Davis Center for Health and Environment, and Bill Lasley, Professor Emeritus at the Center for Health and Environment and the College of Veterinary Medicine, and their colleagues, randomly selected 66 females of reproductive age from the colony and so on. the results of the pregnancy. They compared them with the pregnancies of the previous nine years.

Of the entire group, 45 females became pregnant while smoke pollution levels were high, according to measurements by small particles (PM2.5). Twenty animals conceived after air quality returned to normal levels in December. And a single female did not get pregnant.

After the fire, the birth rate was 82%, while during previous years, with normal air quality, these values ​​ranged from 86% to 93%

After the gestation period, 37 live young were born of the 45 animals exposed to smoke from fires at the beginning of pregnancy. This represents a birth rate of 82%, while in previous years, with normal air quality, these values ​​ranged from 86% to 93%, on average. Of the 20 remaining primates, not exposed to the pollution during pregnancy, live young were born.

“There was an increase in miscarriages among primates exposed to wildfire smoke during the 2018-2019 breeding season compared to primates from the previous nine breeding seasons,” Willson certifies. Most pregnancies did end in a successful birth, he continues.

Although there are some important differences, Rhesus macaques are considered a useful animal model for human pregnancy. Previous studies have associated poor air quality with lower birth weight in human babies, but not with an increased risk of miscarriage.

Although there are some important differences, Rhesus macaques are considered a useful animal model for human pregnancy.

According to the researchers, pregnant women should be considered a sensitive group poor air quality, similar to people with asthma or other lung conditions. Willson recommended minimizing time spent outdoors when the air is unhealthy for these sensitive groups, and wearing a mask that can filter out fine particles.

Although the study did not establish a cause for the increased miscarriage rate, air sampling did show that the smoke from the Camp Fire contained as much material organic oxidized -Probably from the burning of vegetation- as phthalates, derived from burning plastics in houses or other man-made structures that are endocrine disruptors, Willson said.

In earlier work from the California National Primate Research Center, Lisa Miller, from the UC Davis College of Veterinary Medicine, demonstrated that natural exposure of baby macaques to wildfire smoke has long-term effects on their lungs comparable to chronic obstructive pulmonary disease, or COPD, in humans.